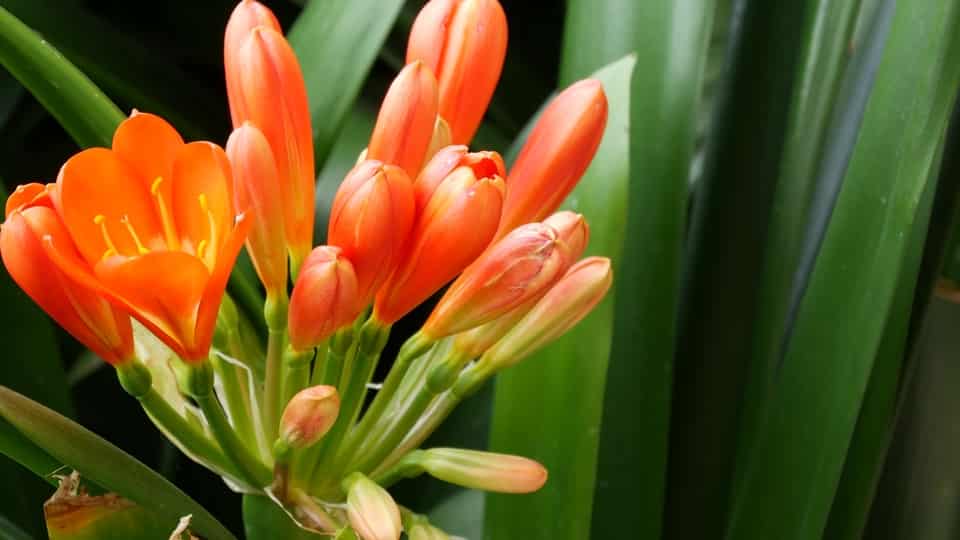 The Kaffir lily, also known as Clivia miniata, is a beautiful flower part of the Amaryllis family. It originates from South Africa, though it can be found in other warm climates around the world. With its wide, dark green leaves and orange, trumpet-shaped flowers atop long stalks, this plant is quite distinctive and eye-catching. Growing a Kaffir lily plant indoors isn’t a difficult task, either, though you do need to give it the proper care to encourage those pretty blooms.

Kaffir lilies are plants that like limited space and are happiest when they are root-bound. Of course, they can also grow quite large, so need a decent-sized pot to start with. Choose one that is at least 12 inches wide to give the Kaffir lily some room to expand without offering it too much space. Outside of that, any type of pot or container will do.

The only other container requirement is that it should also have drainage holes to prevent overwatering. Standing water can cause root rot and kill your plant, so make sure it has proper drainage.

A high-quality potting soil that drains well is best for the Clivia plant. As noted above, excessively moist soil can lead to root rot and plant death. Don’t use outdoor soil as this will not drain properly and hold too much water.

Choose a soil with at least 50% peat moss or other organic matter to provide this plant with the nutrients it needs. You may also want to keep a bit of extra soil on hand since the thick roots may break the surface now and then. Add more soil to cover them when needed.

Growing kaffir lilies from seeds is fairly easy, but does take some time. Don’t expect the plant to bloom for about 3-5 years, so you’ll need some patience if going this route.

You should follow instructions on your seed packet, but the general process is as follows:

From there, the plant will continue to grow and sprout leaves. You can follow normal care following this making sure to thin out your seedlings as to not overcrowd your container.

For those looking for a faster time to bloom, going with an existing plant or seedling is a good option. Choose one that is already a few years old to reduce the time needed until its first bloom.

Like other plants, the Kaffir lily needs more moisture during the warm summer months than other times of the year. They don’t like too much moisture, though, so it’s best to allow the top 2-4 inches of the soil to dry out before adding more water. Simply feel it with your finger, and water when it is dry to the touch or nearly so. Water until you see it begin to leak from your container’s drainage holes. This is a good sign that the soil has sufficient moisture.

When fall hits, you can reduce watering as the plant will tend to slow down its growth. You can still water when the top of the soil is dry, but expect that to be less frequent. Many gardeners report only needing to water 1-2 times per month during the winter.

Kaffir lilies like bright light, though the harsh rays of direct sunlight can scorch the leaves. Indirect light is best, so placing them near an eastern or northern window is best to keep this plant happy and healthy. Kaffir lilies can also survive in areas with partial shade, so you do have a lot of options on where to plant them.

If you don’t have space near a window, grow lights can give this plant the light it needs. Keep these on for 4-6+ hours per day, or a bit less if you’re supplementing natural light.

Though the Kaffir lily blooms in the summer, it doesn’t like the temperature to be too warm. Keeping your home between 60 and 75 degrees Fahrenheit is a perfect temperature range that will encourage growth and blooming. That’s why it is such a great indoor option, it’s already well adapted to typical indoor home temperatures with little to no extra effort on your part.

Kaffirs also don’t enjoy too much humidity. The normal humidity level in your home is good enough for this plant, so you won’t need to add any humidifiers during the summer months. If you feel that the plant would benefit from a bit more moisture, you can also wipe the leaves with a damp sponge once in a while. This not only adds some moisture, but also removes the dust that may have gathered on the leaves which increases light intake.

Fertilizer is an important addition to a healthy Kaffir lily. During its growing season in the spring and summer months, this plant will need fertilizer added every two weeks or so. The best option is 20-20-20 fertilizer, which includes equal parts nitrogen, phosphorus, and potassium. You can also go with a higher phosphorus level if needed, which can encourage blooms. Be sure to purchase water-soluble fertilizer and dilute it to between ¼ and ½ strength before adding it to the soil.

Many plants like to spread their roots out, requiring repotting in larger containers more often than others. The Kaffir lily isn’t one of these, which is part of the reason it’s such a low maintenance plant.

Instead, this plant prefers to be root-bound, blooming best when its thick roots have less space to expand. That’s why the Clivia should only be repotted every two or three years and only when necessary. If the time has come for you to repot your Kaffir lily, be sure to wait until after it has finished flowering to avoid disrupting its growth cycle.

When repotting, do so gently as the roots are deceptively fragile. Carefully remove the plant from its container, and move it to a freshly prepared one that is only 1-3” larger. This gives it more space to grow, while also keeping it relatively constrained.

The Kaffir lily sprouts between 10 and 20 trumpet-shaped flowers when it blooms. These are usually orange, with yellow centers, though there are other varieties that sport red, yellow, or cream-colored blossoms. These flowers stand on a single thick stem in the center of the leaves.

Though lovely, the Kaffir lily blooms only last for a few weeks. When their flowering period is done and the blooms begin to shrivel, it’s best to remove them from the plant. Trim them as close to the base as possible without damaging the leaves growing around them. You can also cut the flowers early and place them in a vase to enjoy if you like.

Like the Amaryllis, the Kaffir lily has a dormant or resting period in the winter, which should be encouraged to ensure it will bloom on schedule the following year. During the winter, place the Clivia in a cooler area with temperatures between 40 and 55 degrees Fahrenheit for 6 to 8 weeks. Note that you don’t want to go much colder than this, and still should avoid frosts.

This period of cold weather is actually beneficial and encourages blooming the following spring. Make sure to provide this period of cooler temperatures for your plant if you wish it to bloom once the weather warms up.

You should also reduce how often you water it to only once or twice during this time. When the dormant period is over, you can move the plant back to its original location.

Kaffir lilies don’t require any special pruning. The only time you need to remove any of the plant is when the flowers wilt or the leaves die. The rest of the time, leave the plant be.

The best way to propagate Clivias is with division, though you need to be careful not to damage the fleshy roots during this process. Right after the plant has flowered, detach any offshoots with attached roots and place them in a new container. These new plants likely won’t bloom for at least 3 years, so be sure to give them the care they need, especially during their dormant cycle, to encourage flowering once they’ve matured.

Clivias are toxic to both humans and pets, due to the Lycorine that they contain. If ingested, you could experience stomach pain or discomfort, with higher levels causing more serious and even deadly results. It’s best to place this plant out of reach of plants and children to avoid any unpleasantness.

Kaffir lilies are an excellent plant perfectly suited for indoor growing. Their light needs are moderate, and easily obtainable for most indoor gardeners, and their other care is minimal. This combination of ease of care and beauty makes them a popular choice for gardeners at every level of skill. If you’re looking to add some low maintenance color to your home, try the kaffir lily plant; you won’t be disappointed.

How Do I Encourage Blooms?

To encourage blooms leave your plant in cooler weather, around 40-55° fahrenheit, for about 6-8 weeks before the spring growing season. This period of cool weather helps encourage them to bloom in the spring, and is a key step in getting them to do so.

How Much Light Does a Kaffir Lily Plant Need?

Kaffir lilies are moderate light plants that want lots of bright but in-direct light. They will grow well in most sunny locations in your home, but also take well to grow lights if needed.

Yes, they are toxic to both plants and animals.

What are Dioecious and Monoecious Plants

Tips for an Environmentally-Friendly Garden

There are many different garden options to choose from, including veggies, flowers, herbs, or even tropical plants. The issue is that many…

The Fiddle Leaf Fig Tree, otherwise known as the Ficus lyrata, originated in West Africa where it grew along the coast for millions of years…