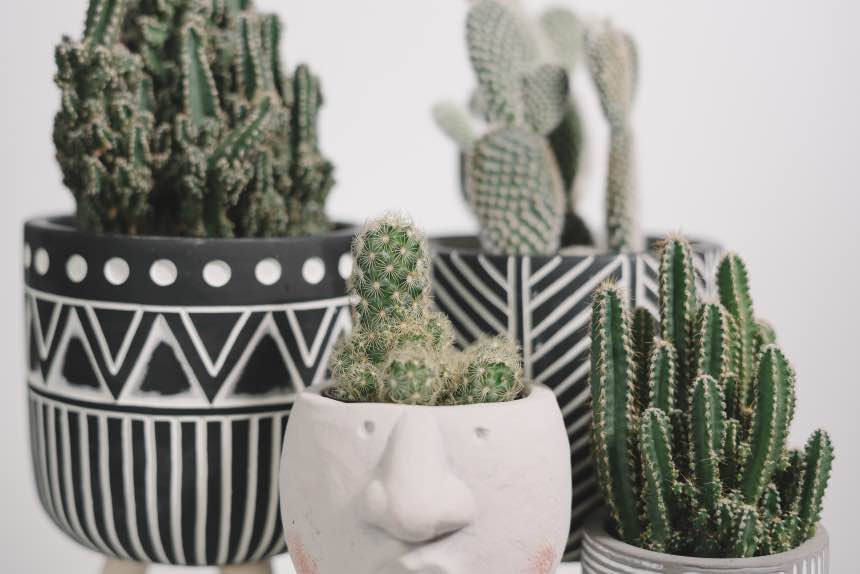 Cacti are some of the easiest plants to care for, requiring almost no maintenance to thrive. There are several types of cacti to pick from, varying in size, shape, and coloring, so you can choose the perfect one to accentuate your indoor garden. Of course, not all cacti require the same level of care, depending on where it’s from it may require more or less care. The following are some fascinating options to consider that cover a variety of styles and care levels.

The Christmas cactus is a native of Brazil, growing among rocks and in trees rather than in the soil. Due to its tropical origins, this plant prefers more moisture than other cacti plants, though its soil needs to be well-draining. This plant is also used to shady conditions, so indirect sunlight is best. The unique look of the Christmas cactus is due to the abundance of long stems, tipped with gorgeous pink flowers that bloom twice a year.

Formally known as Cereus tetragonus, the fairy castle cactus is a native of the North, Central, and South Americas. It gets its child-like name from the many-stemmed clumps similar to the towers of a castle. Though it can grow up to 6 feet, this distinctive cactus grows extremely slowly, making it a fantastic indoor plant and easy to keep at the desired height. For a thriving cactus, soak the well-draining soil and let it dry out before watering again. It also likes indirect sunlight and warm temperatures. If properly cared for, you may even encourage large yellow or white blooms in about ten years.

The star cactus goes by a few names, including starfish and sea urchin cactus. It is small, with a maximum height of about 2 inches, so it fits nicely in small containers for those with limited space. It doesn’t feature any spines, though it does have soft areolas along the length of the greenish-brown white-speckled body. Unfortunately, this little plant is on the endangered species list, due to over-collection by cactus collectors and habitat loss. If you want one of these eye-catching plants, get one from a commercial propagator rather than in the wild.

A moon cactus is a unique specimen since it is created by grafting two plants together. The base of the plant is a Hylocereus, which is dark green. The top half is a Gymnocalycium mihanovichii, a more colorful species that comes in red, pink, orange, yellow, or white. The top scion plant produces no chlorophyll, so it relies on the bottom to survive. The moon cactus doesn’t have a very long lifespan, but with minimal watering and indirect sunlight, you can have a thriving plant for several years.

The Saguaro cactus has an iconic tree-like look that is well-known in western movies and cartoons. It can live for over 200 years, and if properly tended, can be passed down through a family. This cactus grows quite slowly at about an inch each year for the first eight years, making it a lovely choice for an indoor garden, though it can grow up to 50 feet tall during its lifespan. The saguaro cactus needs very little water and direct sunlight, so those living in regions that stay hot year-round can place them outside if they get too large.

The old lady cactus is a powder puff cactus that sports an array of spines and fluffy white down that resembles cobwebs. Though it doesn’t have the most appealing look at first, the gorgeous flowers that bloom on a properly tended plant will change anyone’s mind. This cactus is easy to care for, requiring lots of indirect sunlight and weekly watering to thrive.

This little cactus gets its name from its odd star-shaped body, which resembles the religious hat worn by church bishops. There are a couple of variations to pick from, depending on the features you prefer. The Astrophytum ornatum has long spikes along the pad edges, while the Astrophytum myriostigma has no spines and brightly colored flowers on the crown. Both require plenty of sunlight and little water, making them a breeze to care for.

Also referred to as angel wing, the bunny ears cactus is part of the prickly pear species. It gets its name from the dual oval pads similar to the ears of a rabbit. Despite its cuddly name, this isn’t a plant for touching. It features small hairy spines that can puncture the skin, so it’s best to enjoy this distinctive plant from a distance. Like other cacti, this one needs little water but prefers full sun and can grow to about 3 feet.

The parodia cactus seems to be an odd yellow shade, though this coloring can be deceiving. It is actually a medium-green shade, with sharp yellow barbs covering the surface, making it as dangerous as it is eye-catching. Of course, if you can keep your hands off it, this plant makes a lovely addition to any indoor garden. Parodia is easy to maintain, requiring plenty of indirect sunlight and moderate amounts of water. If you’re lucky, you may even see some lovely red, pink, orange, or yellow flowers, depending on the species you’ve acquired.

The rat tail cactus is named for the long, trailing stems that hang over the sides of its container, reaching about 4 feet in length at maturity. Those stems make this cactus a unique hanging plant, as long as you place it where it can get plenty of direct sunlight. Though the hanging stems are distinctive enough for most cactus lovers, the beautiful flowers that bloom along those stems add a touch of elegance that few cacti species can match.

Formally known as Echinocactus grusonii, the golden barrel cactus is an endangered species, which is why it’s so hard to find. It has a unique globe-like shape with a flat top. Golden spines curve gently from the ribs in small clusters, making this a tricky plant to handle. It can go a few months without water as long as it gets plenty of full sunlight. Though they can reach heights of 6 feet, they grow very slowly, so are quite manageable indoors. If given the right conditions, you may eventually be rewarded with some pretty yellow blooms, though it may take 15 years for them to appear.

Our last cacti variety is none other than the San Pedro Cactus. This cactus is native to the Andes mountains, and has been used for religious ceremonies by the people there for thousands of years. In terms of care, San Pedro is quite easy. It enjoys indirect but bright sunlight, and infrequently waterings. In the wild it can reach heights of up to 20’ but indoors typically tops out at much more manageable height of a few feet.

There are thousands of cacti varieties out there, so any list is only going to touch on a handful of them. Hopefully, the options listed above take your fancy and meet your needs. If not, don’t worry, there are still tons of options to choose from. With a species as varied as cacti, there’s sure to be one out there to fit into any garden.

Cacti and succulents are interesting plants that can be extremely beautiful and easy to grow. While low maintenance, their care is a bit…

Propagating your cactus plants is a great way to trim down the ones that are getting too large, expand your cactus garden, or even share…

14 Container Gardening Tips for Your Plants

How Long Can Succulents Go Without Water?

8 Best Varieties of Kale to Grow, Harvest, and Eat