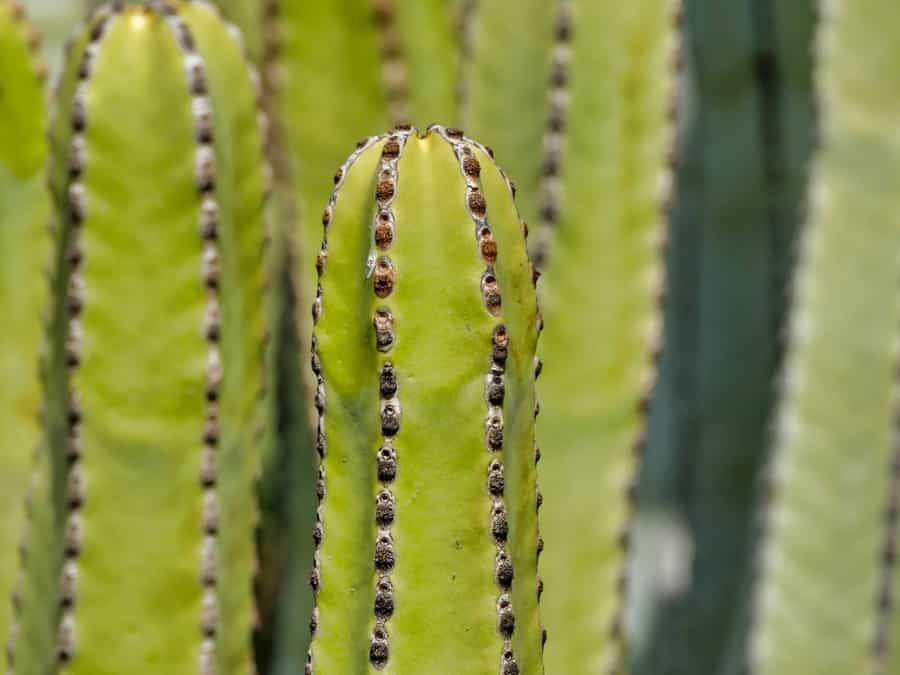 San Pedro Cactus is a gorgeous houseplant that is easy to grow from seeds or cuttings. Most people know that cacti can be grown outdoors in warm climates, but what many don’t know is that they can also be grown indoors. In fact, growing a San Pedro Cactus indoors is a lot easier than you might initially think. San Pedro Cactus is one of the easiest cacti to grow and it can be grown in both warm and cold climates. It’s a fast grower, and you can expect it to grow upwards of 12” per year when properly cared for. Be sure to keep it out of reach of children and pets, as the plant is poisonous if ingested.

About The San Pedro Cactus

San Pedro cactus is a type of cactus that is native to Peru. It is also known as the Peruvian torch cactus and, as noted, grows quickly at a rate of up to 12” per year. The San Pedro cactus has been used for centuries by the indigenous people of Peru for its medicinal properties. It contains a powerful psychedelic compound called mescaline which is known to produce hallucinations and alter one’s state of consciousness.

While mescaline is illegal in most places, the cultivation of the cactus itself is perfectly legal, at least pertaining to United States law. If you’re outside The States then it’s advised you check with your local laws before attempting to grow this cactus.

When it comes to growing a San Pedro cactus, the soil and container are important factors to consider. The plant likes soil that is light and sandy, so be sure to use a potting mix that is specifically for cacti or succulents.

Porous soil that drains well is the key to keeping a San Pedro cactus healthy. They also prefer dry soil, so adding materials like sand, gravel, or pumice can help create the perfect environment for your cactus.

Containers should be wide and shallow, as the plant needs plenty of room to grow. Due to their fast growth rate err on the side of larger to give the plant enough room to grow. Plan on repotting each year if starting from seeds.

You should also ensure that your chosen container has good drainage. You can help with this by adding an inch of pebbles to the bottom of your container.

When planting San Pedro cactus seeds, you will need to start with a pot that is at least 6 inches wide. The pot should have drainage holes in the bottom so that excess water can escape.

Fill the pot with soil that is specifically made for cactus plants and then place the seeds on top of the soil. Gently press the seeds into the soil so that they are just covered. Water the seeds lightly and then place the pot in a warm, sunny location. Use a spray bottle to water at this stage to avoid dislodging the seeds. You can wrap the top of your container with plastic wrap to lock in moisture.

The seeds will germinate in 7-14 days. Once the seedlings have sprouted, you can begin to water them more frequently.

San Pedro cacti prefer bright, indirect light but can tolerate some direct sun. If you live in a warm climate, you can place your plant outdoors for a few hours each day to help it get the light it needs. Just be sure to bring it back indoors before the temperature drops too low at night. San Perdo do best when given several hours of indirect light per day. They are tolerant of a little shade, but do your best to keep them in at least in-direct light. Direct sunlight can fry them out, so avoid it for long periods of time.

Watering is another important factor to consider when growing a San Pedro cactus. The plant likes to be kept on the dry side, so only water it when the soil is completely dry. Allow the water to drain completely and don’t water again until the soil is dry. Overwatering is one of the main reasons that cacti die, so be sure to err on the side of caution. Thankfully, San Pedro cacti are more tolerant than most cacti to being overwatered, so this is less of a concern here than it would be for other cactus species.

San Pedro cacti are drought-tolerant though, so they don’t need much water. Water only when the soil is dry to the touch. During the winter months, water even less, as the plant goes into a dormant state.

Fertilizing is another important aspect of growing a healthy San Pedro cactus. Use a well-balanced, water-soluble fertilizer and apply it every other week during the spring and summer months. Reduce fertilization to once a month in the fall and winter. Be sure to follow the package directions for application rates.

The ideal temperature range for growing a San Pedro cactus is between 65 and 80 degrees Fahrenheit. If you live in a warm climate, you may be able to grow the cactus outside. However, if you live in an area with colder temperatures, or during the winter, it’s best to grow the cactus indoors. San Pedro are more tolerant of lower temperatures, so a little exposure on the low end of this range won’t harm. Try not to make it a habit though as prolonged exposure can be harmful.

Humidity is also important for the San Pedro cactus when it is grown indoors. You should aim to keep the humidity around 60-70%. You can do this by placing the cactus near a water source, such as a humidifier or by spraying the plant with water once or twice a day. This is usually not a concern in the summer, but in the winter can be an issue.

San Pedro cactus can be propagated through cuttings. Cut a section of the cactus that has at least two nodes (the places where the leaves join the stem). Make sure to use a sharp knife or scissors to make the cut to ensure that it is done cleanly and doesn’t harm the plant.

Remove the bottom leaves from the cutting and then dip it in water. Place the cutting in a moist potting mix and keep it in a warm place. The cutting should root within two weeks. Once your cactus has rooted, you can transplant it into a pot of its own.

The San Pedro cactus can produce brilliant white flowers on occasion, and these are quite the sight to behold. They typically open at night, and are only in bloom for about 2 days before they wither and die. This makes the sight of them a fairly rare occurrence, and one that is well worth working towards.

Typically, only a mature cactus will flower. If starting from seeds, expect to wait 3-5 years before it’s ready to produce flowers. Then, make sure it’s getting adequate sunlight and water to encourage blooming.

There’s also some evidence that exposing the cactus to a few weeks of cold during the winter helps to motivate it to bloom the following year. Keep the cactus in an area that maintains about 50° fahrenheit for a few weeks towards the end of winter into fall. Then, bring it back to its normal location and keep up with its care. The cactus is fairly temperature tolerant, so this won’t cause any harm to it, especially when done during the dormancy of winter.

There is no guarantee though. So, don’t get discouraged; it may take a few tries before it blooms.

Growing a San Pedro Cactus is an easy and rewarding hobby. It’s important to provide your plant with the optimal environment for it to grow so that you can enjoy its beauty year-round.

The plant is pretty easy-going so if you just follow these basic guidelines for watering, fertilizing, lighting and temperature (as well as keeping it out of reach of children and pets), your cactus should do just fine!

How long does it take to grow a San Pedro Cactus from a seed?

A San Pedro cactus will germinate from seeds in about two weeks.

How big does the San Pedro Cactus get?

The Cactus can grow 12” in per year and reach up to 20 feet tall. Indoors, expect it to reach much less, generally in the 3-5 foot range.

Does the San Pedro Cactus have Flowers?

Yes, the San Pedro Cactus has flowers that bloom. They are a brilliant white color and will open at night. Once in bloom, they only last for a few days before dying.

Is a San Pedro Cactus Toxic?

Yes, it is very poisonous! Be extremely careful if the Cactus is around Children or Pets. Immediately consult a doctor if ingested.

Is The San Pedro Cactus Illegal?

The cultivation of the cactus is generally not illegal. This does change based on location though, so check your local laws. We’re not lawyers, so don’t take anything we say as legal advice.

Cacti and succulents are interesting plants that can be extremely beautiful and easy to grow. While low maintenance, their care is a bit…

Propagating your cactus plants is a great way to trim down the ones that are getting too large, expand your cactus garden, or even share…