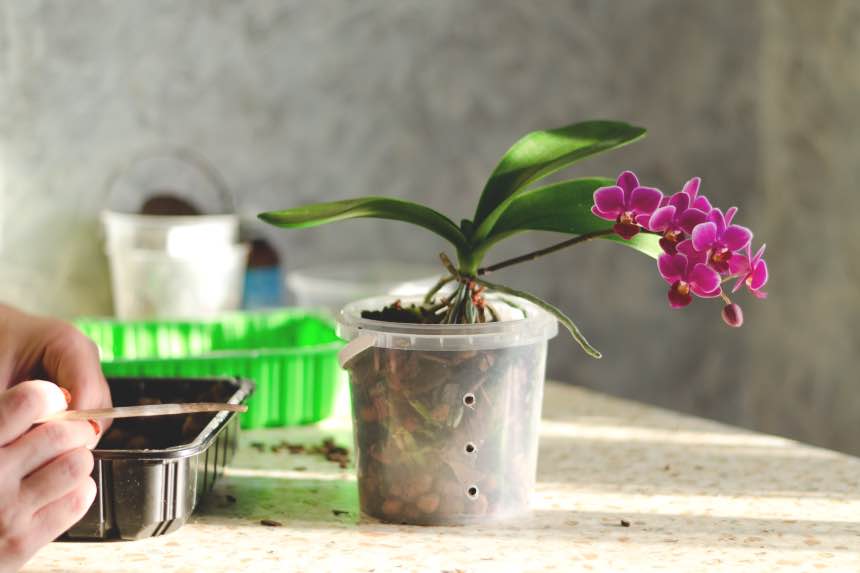 Every plant needs the proper soil mix to survive, but not all plants have similar requirements. Though a variety of species are fine in standard potting soil, some plants require something special to thrive. This is particularly true for epiphytic plants like orchids due to their unique roots and growing habits. So, what is the best potting soil for orchids? Let’s find out.

The root system of an orchid is the opposite of many other plants since only some of them burrow into the soil. The other roots seem to do the opposite, growing in almost any direction, even out of the soil. In the wild, they’ll even search for trees to climb, though in household plants, they normally just poke out the top of the soil. To understand why, we need to take a closer look at the anatomy of an orchid’s roots.

Orchid roots are covered with a substance called velamen, which has two purposes. Velamen features sponge-like properties, soaking up water while offering protection from outside interference. In the velamen are special cells that transfer water to the stele, which functions much like the veins in the human body. Of course, instead of transporting blood, the stele sends water and other nutrients to all parts of the orchid plant.

The roots of an orchid can vary in color from white to green, though bright green usually indicates that the plant has just been watered. This color doesn’t mean it’s healthy, though, since even a plant drowning in moisture will have green roots. You’ll have to touch them to know the difference.

Hard roots are a sign of health and that they are receiving the proper care. Soft, mushy, and hollow roots are rotting from overwatering. Brittle roots aren’t getting enough moisture. Though how often you water can alter the health of your orchid, root issues can also be due to the soil. Using the right one is essential for a happy orchid.

Traditional potting soil is a staple for most plants and can provide the nutrients they need to survive. Unfortunately, it isn’t the ideal medium for orchids due to their delicate root system. Epiphytic plants require high levels of air to survive, so the density of a standard potting soil can actually suffocate an orchid’s roots. To avoid killing this gorgeous plant, it’s best to keep your potting soil for the other plants in your garden.

What Type Of Soil Is Ideal

The ideal soil type for an orchid isn’t soil at all. In fact, orchids need a mix of organic components designed to replicate the conditions of their jungle habitat. A good mix for an orchid contains tree bark, moss, organic matter, and the right blend of vitamins and minerals. Together, these provide the orchid with the right food while maintaining the airy conditions an orchid’s roots require.

If you’re looking for the easiest option, then there are pre-made mixes available to purchase. These take a lot of the guesswork out of the process, and give you a good base to grow your orchid from. However, you can always make your own mix which can be a fun gardening project in its own right.

How To Make Your Own

To make your own orchid potting mix, you’ll need to gather the proper materials to create a light, well-draining mix that won’t suffocate the plant’s roots. Let’s take a closer look at the best components for the job.

Bark contains the right mix of organic materials to provide your orchid with the food it needs. You can collect your own if you have the right trees in your yard, though you’ll need to watch for any disease or other issues that could damage your orchid. Trees like Douglas fir, redwood, or any deciduous tree have the best nutrients for an orchid. If you don’t have access to healthy trees, you can also buy these types of bark at any home center or garden supply store.

Like the roots of an orchid, sphagnum moss has a delicate system that gives it some interesting properties. It contains capillary tubes that act as a sponge, absorbing and retaining water without becoming overly saturated. Its characteristics aren’t surprising since this moss is native to wet, boggy areas, floating on the water’s surface like a cushioned mat.

When added to your orchid potting mix, sphagnum moss retains the water the plant’s roots need without soaking them and risking root rot. Of course, you’ll need high-quality moss for the proper moisture levels. Poor-quality moss becomes dry and brittle rather quickly, so it won’t be able to hold onto that moisture, leaving the roots to dry out.

Charcoal has a few benefits that make it a fantastic addition to your orchid potting mix. It retains some moisture, so the plant doesn’t dry out too quickly, though it doesn’t soak the roots, either. It also raises the pH of the potting mix, which keeps the root system healthy for better plant growth. Though pests aren’t as common for indoor plants as those grown outside, they can still attack your plants. Charcoal helps by repelling them to keep your plant insect-free.

Perlite is easy to find since it’s a common ingredient in many types of potting soil due to its high nutrient content. For orchids, it also aids in water retention and aeration, keeping the soil damp while allowing plenty of airflow. Adding perlite to your orchid potting mix ensures fantastic blooms and lush greenery.

When creating your potting mix, you’ll need to use mostly bark since this encourages the airflow to your orchid’s unique root system. When mixing your ingredients, combine 4 parts bark and 1 part each of the sphagnum moss, charcoal, and perlite. The resulting potting mix will give your plant the right mix of moisture, aeration, and nutrients for a lush, healthy orchid.

Orchids are a gorgeous addition to any home garden, though they need the right soil mix to thrive. No ordinary potting mix will do since the delicate roots of this epiphytic plant require the right conditions for healthy growth. An orchid mix containing the perfect combination of the ingredients we’ve described will ensure your plant will have everything it needs to survive.

How To Repot Orchids

Orchids are one of the most unique indoor plants you’ll find, due to their delicate stems and the fabulous scent emitted from their gorgeous…

12 Best Decorative Indoor Plants That Are Easy To Grow

Greenery belongs just as much indoors as it does outdoors. If you live with a cold and austere interior, then it might be time for you to…

How To Grow Orchids Indoors

Orchids are some of the most beautiful plants and coveted by many gardeners for their beauty. Today, we’re going to take a look at learning…