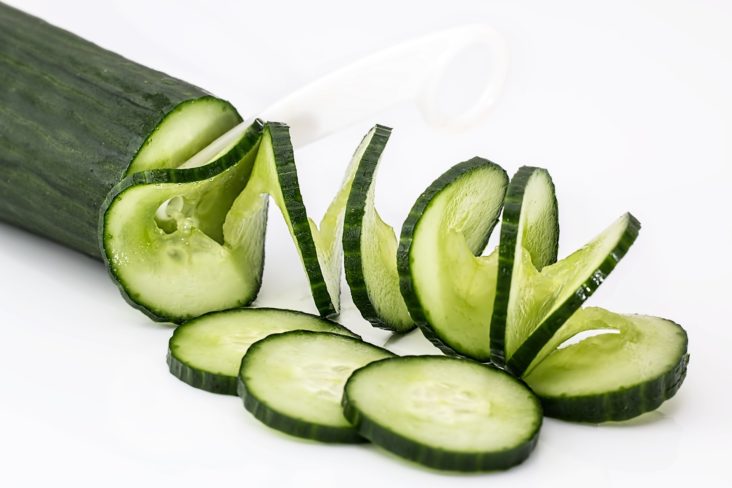 Cucumbers are a delicious fruit (yes they technically are) and a staple of many summer gardens. These fruits are a delight to grow and don’t take too much effort. While you can certainly grow these outdoors in the ground, you can also grow them in containers. This gives you the option of growing them outdoors, indoors, or a hybrid of the two. Today, we’ll look at how to grow cucumbers in containers and how you grow cucumbers indoors as well. 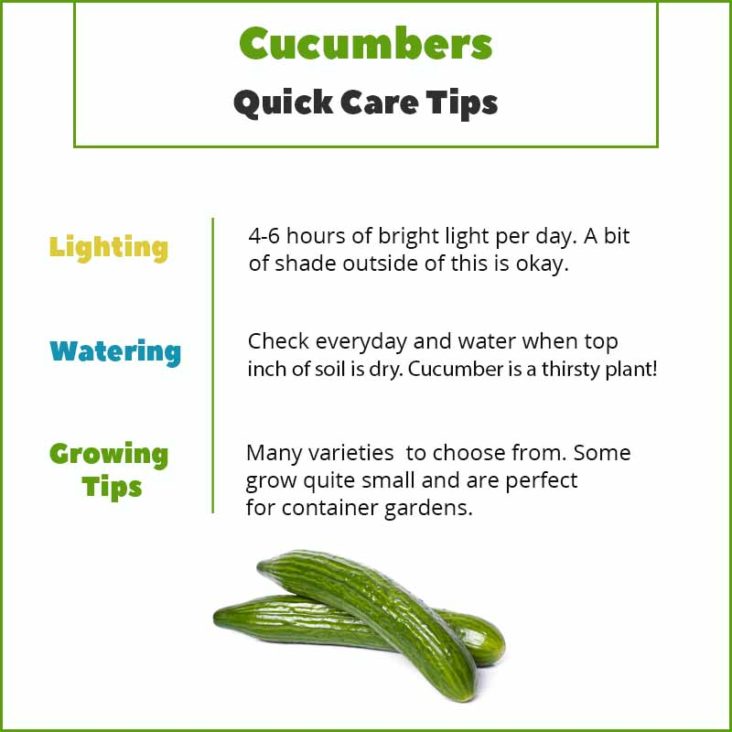 The first step is to choose a variety of cucumber. In general, there are two types, bush and vining.

Bush varieties are usually the go to for container gardeners. They don’t grow as large, which makes them great for pots or hanging baskets. Many bush varieties are specifically bred to be smaller while still producing delicious fruits.

Vine cucumber plants on the other hand are typically much larger, growing upwards of 8 feet. While this means they will produce more fruit, they also need a lot more room to grow. You’ll want to purchase a bigger pot to house them, and you’ll also likely need trellis to help them climb vertically to prevent them spilling outside their container. They also make a great choice for those looking to grow in-ground where space is less of a concern.

Each of these varieties then has tons of different options to choose from. There are even a good number of small-breed cucumbers that are perfect for container growing. The pick a bushel or salad bush varieties are both bred to grow smaller plants making them great for container gardening. While you can certainly get creative here, if you’re a beginner it’s best to pick one of these smaller varieties as they are typically easier to care for.

Choosing a good location is important for any plant, and cucumbers are no exception. The most important thing to a cucumber is the correct amount of light and a decent amount of heat. Cucumbers like warmer temperatures, and grow best in the summer. If growing indoors, this means keeping them in a place that stays relatively warm and is away from drafty windows or cooling vents.

This need for heat also means that you don’t want to plant them or move them outside too soon. Wait until at least two weeks past your last frost date before doing anything outdoors with cucumbers. A late frost is a quick way to stunt their growth or kill them.

For planting, you can either start from a seedling or grow from seeds. Seedlings are the easiest, and is recommended for most gardeners. Most hardware stores or nurseries will have cucumbers available.

For starting from seeds it’s best to plant them directly into their final container. Cucumbers are difficult to transplant so it’s better to try to avoid doing so if possible. You can plant 3-5 seeds in a single container, but don’t be afraid to remove some once they start growing to prevent crowding.

Cucumbers need a relatively big container to grow and require enough room for their roots to spread. For this reason, a 5 gallon pot is generally the minimum size, although going bigger certainly won’t hurt. For vine or other large varieties you may want to consider moving up in size as well.

For soil, any good potting soil mix will do. These are generally well draining and won’t compact when sitting in a pot. General purpose garden soil is not made for pots, so make sure to select a type that is specifically for container growing.

When you first plant your cucumber you can also mix some slow release fertilizer into the soil. This just ensures that the plant has enough nutrients to grow. This isn’t strictly necessary as most soils will have some initial nutrients, but it can’t hurt.

Watering is one of the most important parts of cucumber plant care as they are a relatively thirsty plant. The general rule of thumb is to check the top of the soil and if it’s dry water the plant.

For cucumbers it’s recommended that you check the soil every day. They are a thirsty plant, and especially in the summer will use up their water supply very quickly. If allowed to wilt the fruits produced by the plant will begin to taste bitter so it’s important to avoid this.

When you do water it’s best to give it enough water to soak the soil. Wait until you start to see water leaking out of the drainage holes as a good visual indicator that the soil is saturated.

In terms of feeding, it’s best to fertilize roughly once a month with a diluted liquid fertilizer. Cucumbers are nutrient demanding plants, and they’ll quickly drain your potting soil of its initial nutrients. You can also use a slow release fertilizer if you prefer.

Cucumbers need bright light, but only for about 4-6 hours per day. This gives gardeners a bit of leeway in where they can be placed compared to other fruits and veggies. A bright window or partially shady spot both make good locations to grow cucumbers.

This lower light need also makes it easier to grow cucumbers indoors during the winter months. Light is typically less intense during these months, but still should be enough to give them the light they need to thrive. More of a concern here is typically temperature as anything less that around 70°F will potentially hamper growth.

As always, you can supplement with a grow light if necessary. This opens up further options for location, and can provide them the needed light even in dark rooms.

The size to harvest is dependent on the variety of cucumber you’ve chosen to grow. This can range from as small as a few inches up to over a foot; make sure to read the guidelines of ripeness for your chosen variety.

One thing that all cucumbers do share though is you never want to tug on the plant to remove the fruit. This can damage the plant and stunt further growth. It’s best to take a pair of scissors and gently snip off any harvestable fruits.

You also don’t want to leave ripe fruits on the plant for too long. This can lead to the plant growing dormant and not producing any more fruits. Even if you don’t plan on using it, it’s best to harvest the fruits as they become ripe to encourage long term growth. Harvesting doesn’t hurt the plant at all, and is essential to the overall health of the plant.

One interesting thing to keep in mind when growing cucumbers is that they are a natural vine plant similar to ivy. While vine varieties certainly embody this the most, even some bush varieties can shoot out relatively long vines.

This makes cucumbers a great plant to practice vertical growing techniques with. Using well placed trellises, you can encourage the plant to grow tall rather than wide. This is a great way to conserve space, while still providing a good environment for your plant.

Note that a tall plant still requires a large pot to grow as they need the space to support their root system. If you’re looking to grow large, vertical cucumber plants make sure to buy a container large enough to contain the root system.

Lastly, I wanted to touch briefly on some growing cucumbers indoors specific tips. Overall, the care is the same in terms watering, lighting, and feeding. Where space is a concern, it’s best to pick one of the smaller varieties.

Outside of that, the primary concern for growing cucumbers indoors is likely to be temperature. As cucumbers need a steady temperature of at least 70°F this may be an issue for some homes. It’s also best to keep them away from any drafty or cool air like a vent as this can adversely affect the plant.

Overall, cucumbers are a great plant to grow indoors if you have the space to house them. Their light needs are relatively low compared to similar plants, which means they can thrive quite well indoors. The only downside is their relatively large space requirement which means you can’t grow them on a small windowsill like many herbs.

How To Grow Cucumbers In Containers

Cucumbers make a great addition to any garden, and are one of the easier edible plants to grow in containers. The best thing about container gardening is the ability to grow plants both indoors and out, and enjoy your garden year round. Cucumbers are easy to grow in either location provided the right care is given to them.

Water: Water when dry to the touch and soak the soil with each watering. This may be as often as every day in the warmer months.

Lighting: 4-6 hours of bright sunlight per day. Harvesting: Harvest according to your variety. Take care to not damage the plant and snip off the fruits instead of pulling. Care: Keep cucumbers warm, low temperatures or frost can easily stunt the growth of or kill the plant.

Getting Rid Of Spider Mites