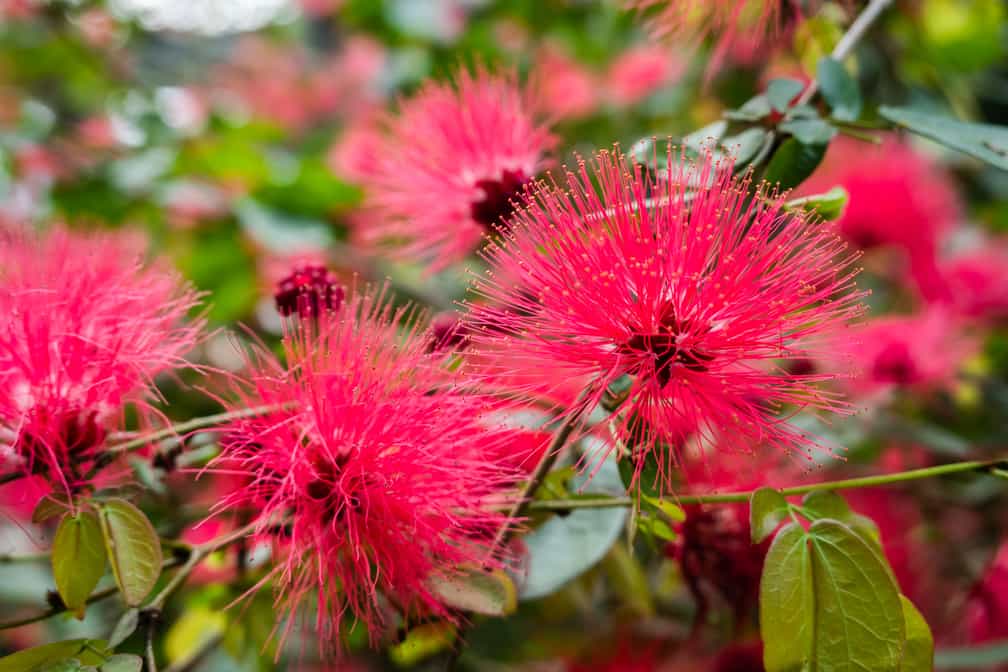 The fairy duster plant, formally known as Calliandra, can be found in the western United States and the tropical areas further south. It has a unique appearance, thanks to the round, feathery flowers and lacy-looking leaves that make it a popular decorative plant.

Despite the delicate look of the blooms, these plants are extremely hardy and can handle high heat and drought conditions when necessary. They are often grown in hotter climates to accentuate yards and can be placed in rows to create natural barriers. Though they are rarely grown indoors, it is possible to do so if you provide them with the right conditions. Today we’ll look at what it takes to grow your very own fairy duster plant indoors.

There are over 250 varieties of fairy duster plants, with a range of sizes to choose from. Of course, most of these are much too large to grow indoors without significant pruning. When choosing one of these for your home, it’s best to stick to the dwarf varieties. Two popular choices are the Calliandra californica and the Calliandra eriophylla.

Californica, also known as Baja Red Fairy Duster, is a native of California. It has bright red flowers and deep green foliage that are quite attractive. It can grow up to 5 feet wide and 5 feet tall, though you can prune it down to keep it somewhat smaller.

The eriophylla variety, also called Pink Fairy Duster or False Mesquite, has light pink flowers and bright green leaves. It is somewhat smaller, with a mature size of 3 feet in both height and width. Again, it can be pruned as needed to fit in the space you have available, though too much pruning will prevent flower growth. This one is particularly well suited for indoor container growing. Start with this variety if you’re looking to grow a fairy duster plant indoors

Fairy dusters are used to the dry, arid conditions of the desert, so they don’t like to sit in overly damp soil. Choosing a rich, peat-based potting soil that drains well is best for these plants. This gives them the nutrients they need without holding onto too much moisture.

You can also use a succulent or cacti soil mix. These mixes are very well draining, and will generally prevent any overwatering problems with your fairy duster. If you have a heavy hand when watering, lean towards these types of soils. As we’ll see in a minute, fairy dusters do best when their soil isn’t overly moist.

As you might imagine, fairy dusters are quite drought tolerant and don’t need too much water. Being a desert plant, they are used to going long periods without water, and can survive short droughts. That said, if you want them to bloom, you should still be consistent with watering them.

During their growing season, water them about once each week, letting them dry out before adding more moisture. You can reduce how often you water them in the winter as well but don’t let them dry out completely. Doing so will cause leaf drop since the plant will be forced to conserve moisture. If you notice any leaves turning yellow, the plant is being overwatered, so cut back on the moisture level.

While the fairy duster can survive extreme droughts, if left without water for too long it will begin to shed its leaves to conserve energy. If you notice your plant is losing leaves, that’s a good sign that it isn’t getting enough water. Try watering it a bit more and the leaves will stop dropping.

These plants are used to almost constant daily light in the desert, so they need something similar in your home. Of course, you do need to be a bit careful when growing them indoors since the glass of your windows magnifies the sun’s rays and makes them even hotter. During the summer, you may want to hang some sheer curtains to soften the light a bit, though this won’t be an issue during the colder months of the year. This also isn’t likely an issue in cooler regions as the plant is already used to higher temperatures of the California deserts.

Those with a sunroom will want to locate these beauties here to ensure they’re getting the light they need. If your home is lacking a sunroom, south-facing windows are best to give fairy dusters the consistent light they need to thrive.

Outside of that, a grow light may be necessary to provide these plants with enough light. This is especially the case in temperate climates that are naturally a bit less sunny than the desert. Signs of low light generally include a lack of blooming flowers, or flowers that bloom and quickly die.

The climate of the desert includes hot days and cold nights, so a fairy duster plant can handle both. It prefers warmth, though, so keeping the temperature at 75 degrees Fahrenheit or higher is perfect for this plant. For best results mimic its natural environment and provide warmer days with cooler evenings and nights. This follows what the plant would naturally experience in its native habitat.

It doesn’t like drafty areas, either, so be sure to place it away from any furnace or air conditioner vents. Again, sunrooms are best in the summer rather than an air-conditioned home, though you may need to move them further inside if you live in an area with cold winters. This will prevent the loss of leaves and encourage some winter blooms.

High humidity isn’t a must for fairy dusters since they are used to drier conditions of the desert. Of course, they still do like the extra moisture in the air, so to encourage more growth and frequent blooms, keep the humidity up by placing a humidifier near this lovely plant. You can also mist them generously to keep the relative humidity high around the plant.

When growing this plant indoors, it needs fertilizer more often than it would outside. Adding a weak fertilizer throughout its growing season will ensure it’s getting the nutrients it needs. During the winter, when the plant goes dormant, you can reduce fertilizing to once a month or so. Fairy dusters aren’t particularly nutrient hungry though, so a little fertilizer will go a long way with these plants.

Though they don’t need too much pruning outside, you may want to trim this plant down to keep it smaller when growing it indoors. If you notice it’s getting too large or leggy, do some trimming in the summer to reduce its size.

Be sure to use hand-held pruning shears to ensure a clean cut that won’t damage the plant. Only prune branches that have 5 leaves or more, cutting them back to 1 or 2 leaves. This ensures that pruned branches are still able to get enough energy to recover.

Fairy dusters can grow quite large in their natural habitat, though you can prevent this when you have one of these plants in your home. Rather than repotting it frequently, you can limit this to every other year to prevent it from getting too big, as long as the plant is still healthy and strong in its smaller pot.

Pot size will naturally limit further growth, so it’s also okay to maintain its current container if it’s at the desired size. In these cases, still look to replace the potting soil every few years to prevent issues with compaction and provide fresh nutrients.

You can propagate a fairy duster from stem cuttings removed during the spring. Place the cutting in a pot with seed-starting soil and some rooting hormone for the best results. They may take a while before they grow large enough to bloom, though, so don’t expect miracles.

These plants also produce flat seed pods that can be used to grow new plants. Boil water, then let it cool. Place the seeds in a bowl and pour the water over them. Let them soak until they swell, which could take between 8 to 24 hours.

While waiting, prepare a pot with well-draining soil. Then place one or two seeds ¼-inch deep in the soil. Put the pot somewhere that gets light shade. Keep the soil slightly damp, letting it dry out before adding more. It could take up to 45 days for the seed to germinate. When this happens, move the pot to a sunnier area, adding moisture when the soil dries out.

Fairy dusters are beautiful plants that are surprisingly easy to grow. While they do need a good amount of light, that’s really the hardest part of their growth. If you can provide that, the rest of their care will be a breeze.

How Much Light Does a Fairy Duster Need?

Fairy dusters are used to the full light of the desert and need as much as you can give them. Shoot for at least a full 8+ hours of light.

How Much Water Does a Fairy Duster Need?

Fairy dusters don’t need much water, giving them a generous watering about once per week is usually enough. If you notice leaves dropping this is a sign that your plant needs more water.

Is A Fairy Duster Plant Toxic?

No, fairy dusters are not known to be toxic to people or pets.

With the dreary winter almost upon you might be tempted to bring a little sunshine indoors. Growing plants indoors is a great way to…

How To Grow Succulents For Beginners

Succulents are some of the most beautiful and varied plants out there, and a great choice for budding gardeners. With their countless…