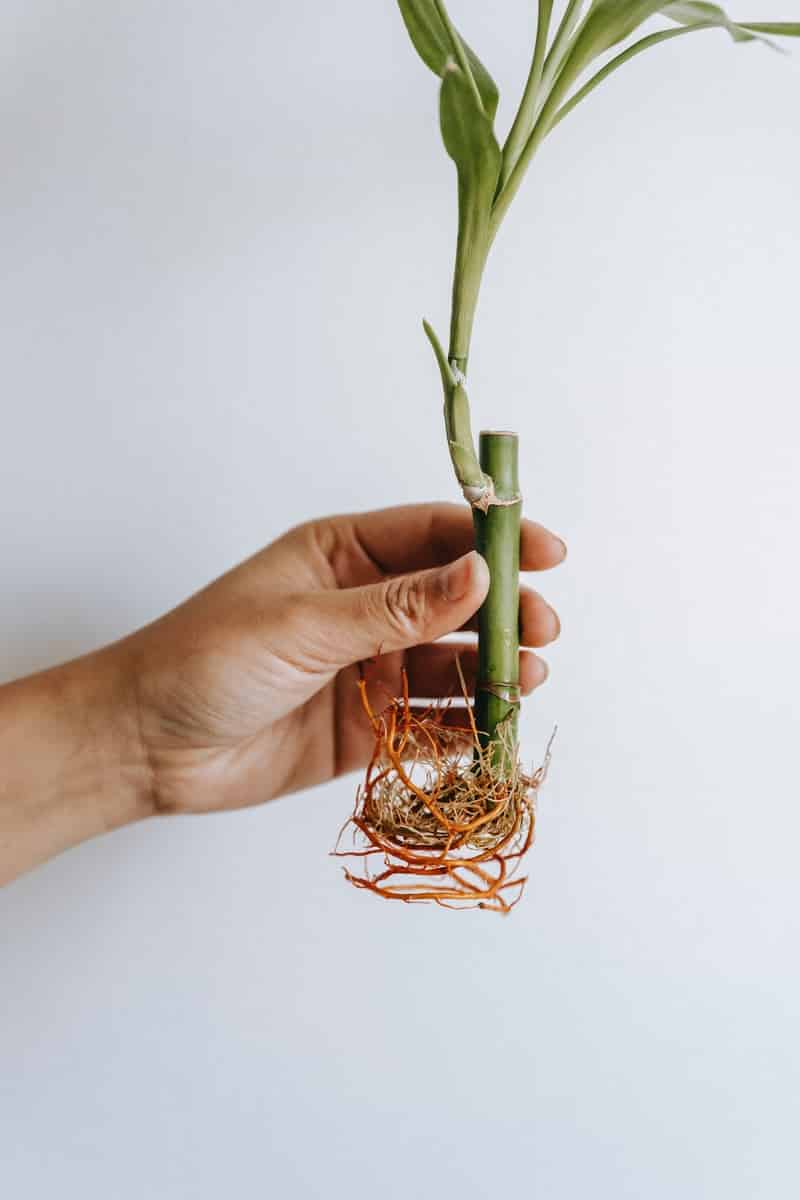 Lucky bamboo, more formally called Dracaena sanderiana, was originally from Africa, though it is more commonly found in Asia these days. This pretty plant has been a large part of Feng Shui practices for thousands of years due to its representation of happiness and good luck, hence its nickname. Caring for Lucky bamboo is easy, regardless of whether you’re using it to balance your home or just as a lovely new addition to your garden.

There are two options when it comes to planting your Lucky bamboo, and each can grow equally well. First, you can plant Lucky bamboo in a rich potting soil that drains well to give it the nutrients it needs to survive. This is the traditional method of growing, and will be familiar for most gardeners. However, this plant doesn’t actually need the soil to thrive.

Instead, you can place them in a vase, surrounding the ends of the stalks with pebbles to keep them upright and adding some water. This is a much easier way to plant them, plus it is less messy when you need to repot your Lucky bamboo. There should always be at least an inch of standing water in the vase to keep the stalks healthy.

You can plant Lucky bamboo in any container or vase you like, as long as you can fit the proper amount of soil or water in it to keep the stalks upright and healthy. There should be a bit of space between the stalks and the edge of the vase to give them room to grow. A clear vase looks nice but it does allow light to penetrate, which could lead to algae growth when growing the plant in water, so an opaque or colored vase may be a better option.

Vases aren’t the only option though, and other containers work. Just make sure that they are large enough to accommodate the plant and keep it from leaning over. This generally means the container should be taller than deep.

Lucky bamboo doesn’t need a ton of water regardless of how you choose to plant it. If you’re growing your stalks in soil, they should be kept slightly damp at all times. Too dry and it won’t survive while too much water could cause root rot. Adding small amounts of water every few days or so is best.

If you’re growing your Lucky bamboo in water and pebbles, the water level should only be about an inch high in the vase. This is enough to cover the roots but not much more of the plant. Add more water every 7 to 10 days as needed.

You should also be careful of what type of water you’re adding. Tap water contains chemicals like chlorine or fluoride that could damage the stalks. You can leave tap water out overnight to evaporate some of these chemicals and make it less harmful for your plant.

For the best results, use distilled or filtered water to keep your Lucky bamboo healthy. Watch for red roots as a sign of a happy plant. You may also want to change the water every week or so to prevent odor and disease.

Proper lighting is another important factor since the wrong type can damage your plant beyond repair. These stalks like bright light, though it must be filtered rather than direct sunlight since the latter can scorch the leaves. This means you’re generally looking for a spot that gets a lot of in-direct sunlight or an area slightly moved back from the most intense area of light.

To be sure that you’re giving them the light they need, pay attention to how the plant grows. They can handle lower light conditions for a short time, but if they look like they are beginning to stretch towards the light source, or their green coloring begins to fade, they need more light than you’re giving them. On the reverse, yellowing leaves is often a sign of too much light. Overall, lucky bamboo doesn’t require too much sunlight, and only in rare cases would not getting enough light be an issue.

When you consider the African origins of the Lucky bamboo, it’s no wonder that they prefer to live in warmer temperatures. Keep them in areas between 65 and 90 degrees Fahrenheit for this plant to thrive. It also shouldn’t be placed near drafts, like furnaces and air conditioning vents or leaky windows.

They also like their area to be somewhat humid if possible. Though this can be difficult to maintain when you’re growing Lucky bamboo indoors, especially in colder climates, there are ways to keep this plant happy. Prune it regularly and maintain the proper water levels in its vase. You may also want to watch the plant for brown leaves since this can indicate an environment that is too dry for this plant to survive.

Unlike other plants you may be growing in your home, Lucky bamboo needs very little fertilizer to survive. It requires a very weak liquid fertilizer, with only a very small amount added to the water each month to give this plant the food it needs. There are specialty Lucky bamboo fertilizers available as well, though they also shouldn’t be overused. Yellow leaves can be an indicator of too much fertilizer, so watch for changes in color and take a break from the fertilizer until the plant is looking healthy again.

Pruning Lucky bamboo is an important part of it’s care routine and prevents it from becoming top-heavy and falling over. Use sterilized snippers to remove offshoots, trimming them within 2 inches of the main stalk. You can use those trimmings to propagate new plants as long as they have at least one leaf joint present. You’ll want to trim every couple of weeks during the summer months, or when you notice the offshoots have grown too large. During the winter, you can prune less often as the plant is likely to slow down it’s growth.

As we stated above, changing leaf colors means that there is something wrong with your plant. Changes to the stalks and roots can also indicate that you’re Lucky bamboo needs some extra attention.

For instance, mushy stalks usually mean that your plant is unhealthy and likely won’t be salvageable. Causes for the mushiness can include poor water quality, fungus growth, or even bacteria that could have been present when the plant was purchased. Remove the decaying pieces to prevent damage to nearby stalks and hopefully prevent the issue from spreading. You should also replace the water and stones to keep the remaining plants healthy.

Several issues could also lead to black roots. If you notice this discoloration, snip away the black areas. Change the water and clean the vase before replacing the stalks. Keep an eye on them to be sure the new roots are growing in red and orange. This is often caused by bacteria in the water or soil. Make sure that you’re switching out the water on time, and don’t overwater the plant if it’s in soil.

Lucky bamboo is a great choice for an indoor plant, and is successfully grown by all levels of gardeners. Being able to grow it without soil is an interesting trait, and has a lot of appeal from both a maintenance and aesthetic point of view. Do you grow lucky bamboo indoors? Let us know, we love to hear stories from our readers!

Is Lucky bamboo difficult to care for indoors?

Not at all, lucky bamboo is quite easy to care for. Make sure to water when needed and give it enough light and it will happily grow for years.

How Long Does Lucky Bamboo Live for?

In a vase with water for up to 2 years. For a longer lifespan transfer to soil where you can expect it to live for an additional couple of years.

This is a potentially serious issue, and should be dealt with immediately. This is often caused either by lack of water, or too much direct sunlight. Figure out which one of these applies and correct it.

The Fiddle Leaf Fig Tree, otherwise known as the Ficus lyrata, originated in West Africa where it grew along the coast for millions of years…

Growing bonsai trees is one of the most popular ways people get started with gardening. While we put together a more general overview of…

Growing Peace Lily The Peace Lily, oftentimes referred to as the Closet Plant, is an easy option for the beginning gardener since it isn’t…